Copenhagen Airport has reduced the frequency of elevator door accidents by 90 per cent thanks to Panachrome 3D light curtains from Avire.

When 14 of the airport’s lifts were protected by standard 2D edges, employees driving trucks would regularly misjudge their approach. As they neared the elevators and realized that the doors were about to close, they could not stop the 1.5-tonne trucks quickly enough to prevent them colliding with the doors. A small number of careless passengers also caused door damage with their luggage carts.

During that period there were between one and five incidents of door damage recorded every day. Following installation of Avire’s 3D safety edges, that number had dropped to three a month. 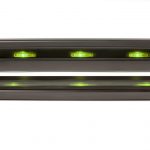