When selecting a suitable light curtain for your elevator door safety application it is important to consider several factors before making your decision. Diode count, number of beams and response time all play a part in determining the relative performance of a particular detector, and no feature should be judged in isolation.

Elevator doors travel at slow speeds to avoid physical damage to passengers or equipment. Detectors are mounted between the inner and outer doors. The depth of the doors (front to back) means that there are several centimetres of unguarded space.

Doors that close relatively quickly have a higher risk of hitting people or equipment (prams, wheelchairs, trolleys, etc.). A typical closing speed of a elevator door is 0.5m/s. This means in 100ms the door will only travel 5cm until the detectors are triggered. The doors themselves have inertia, so they will continue to travel a short distance even after a trigger. 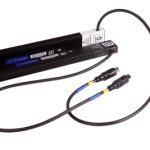