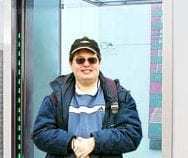 John Taylor, resident of Cambridge, recently contacted Avire about their Panachrome lift door safety edges. Mr Taylor is partially sighted, but clearly saw the bright red and green indicator lights from the system installed in Waterstone’s book store in Cambridge, and tracked down the manufacturers to tell them what he thought:

I just wanted to let you know how impressed I have been with your Panachrome product, it was installed on two lifts in Cambridge when they were refurbished by Accord Lift Services, and they are a real help to me. The extra safety provided by the two coloured light sensors is really worth it I think, and I will actually be recommending it to a shopping centre manager I know for installation on all their lifts. I just wish more lift companies would install them as standard as they are of such great benefit – I really think it would help a lot of people. Many lifts are very difficult for people with impaired vision to use easily, and even ones which are DDA compliant could and should do more.”

He explained how such everyday activities as using automatic doors or reading signs and menus can be made into unnecessary challenges due only to a lack of forethought. “It’s not hard to have a large-print menu, or to install large buttons, but it can make a huge difference every single day. Even if someone had just forgotten their glasses, why not make it easy for them? The coloured lights from the Panachrome were something I hadn’t seen before, and I think they are a great way to help people like me. I really recommend them.”

Mr. Taylor has taken an admirably active stance in response to the challenges he encounters, and his energy for educating people about issues such as this has already led to enlightened attitudes and improved services from several companies and organisations.

Panachrome is Memco’s combined detector and indicator system for lift doors: as with other detectors, it uses a criss-crossing web of infra-red beams to detect any obstructions to the doors, and prevents them from closing on anyone or anything. What makes Panachrome different is that it also has LED lights on the door edges which flash ‘green for go’ when they are opening and ‘red for stop’ when closing, clearly and easily informing passengers of when it is safe to enter the lift. Importantly, these coloured indicators draw attention to the detectors themselves –several buildings where the system has been fitted have received positive feedback from users, not least because lift safety was something they simply had not thought about before.